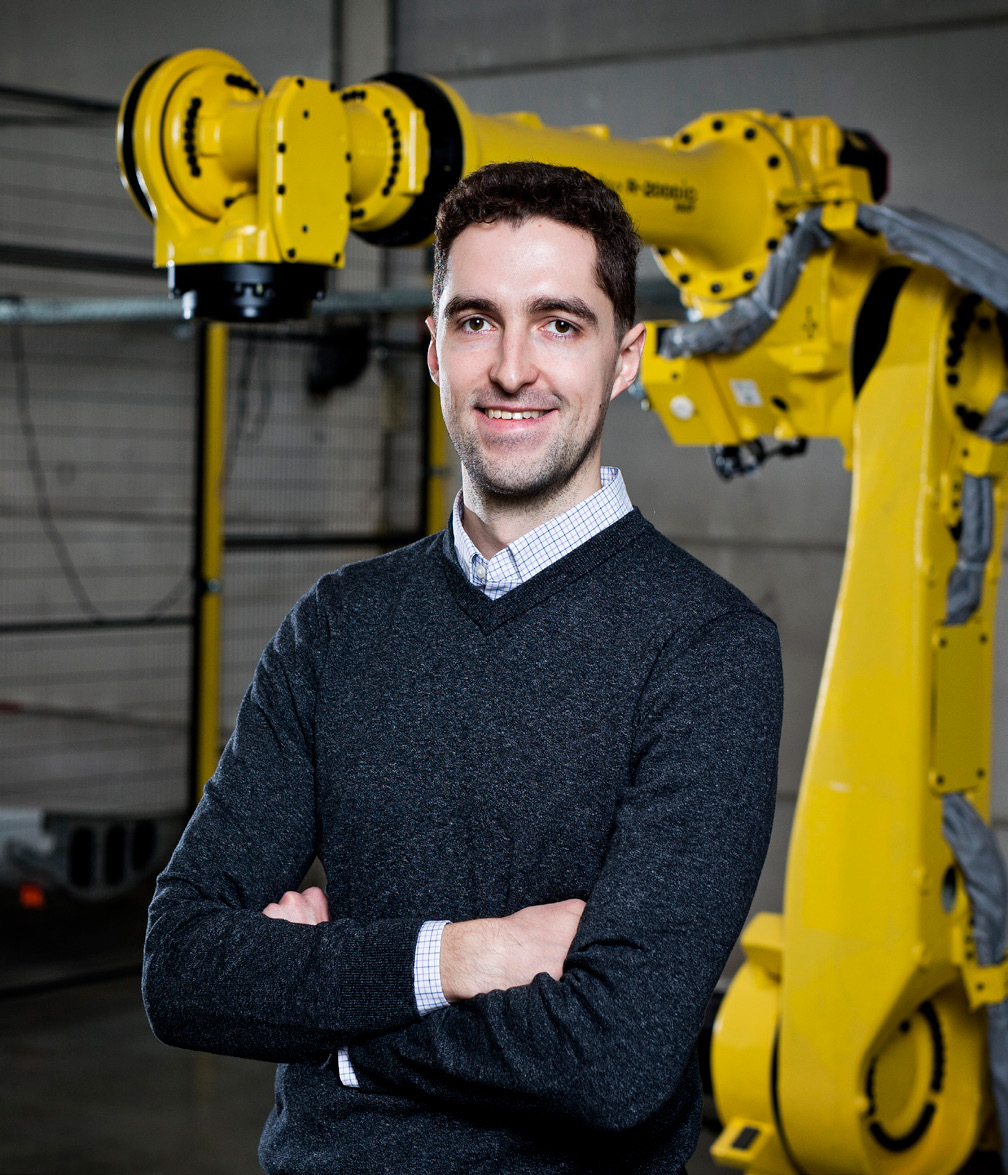 What was the path that brought you to DIH²?
I graduated as a robotics engineer ten years ago and after spending the first five years of my career outside robotics, I started working for a large tech organisation mostly doing project management and analytical roles. During my time there we built an R&D laboratory from scratch that eventually employed 50 people. I love working in collaborative settings, so when Delft University of Technology offered me a role as a researcher it was an obvious move to make, and it was during my time there that I first met the guys at RoboHouse. I quickly found out that we shared a lot of values and interests focused on the need to connect businesses with innovative solutions and after collaborating with them for 6 months or so through the university, I joined the RoboHouse team and took over the LER role on DIH². At RoboHouse we have a mission to make work healthy and empowering, and to do that we need to have the ability to make the connection between academia and industry and that skill set is exactly what I need in DIH².

And what excites you in the field of robotics today?
Lots of things but I’ll try and narrow it down. We have an ever-increasing demand for robotics, and we know that robots can be an amazing force for good when it comes to handling dangerous tasks such as disaster relief, or by helping to improve economic feasibility and scalability in the manufacturing sector, or to enable reshoring. The pandemic really showed us how much we need strong, secure production, logistics and healthcare industries. And how vulnerable these life-critical industries are. I recently read an article by Rodney Brooks who pointed out that successful cases of robotization often have either a low cost of failure or have a human in the loop. Understanding this is important and once we have figured out how to overcome this, we will experience a major breakthrough. It’s hard to know exactly when that breakthrough is coming though because – to paraphrase Bill Gates - we tend to underestimate the impact of change, whilst overestimating the speed of that change. Personally, I believe two disciplines can significantly contribute to overcoming these barriers: software engineering and systems engineering. Marc Andreessen famously said that „Software is Eating the World“. It becomes literal when we connect it to sensors and actuators. Hardware is very important, and it is a prerequisite for physical actions in the real world, but good software allows you to push the limits. Think about a sensor: we can experiment with materials to achieve higher accuracy, precision, and resolution but we also can develop an algorithm to filter noise and achieve even more. Back in 2008, a group of roboticists at Stanford showed a PR1 robot operating a dishwasher, vacuuming, and cleaning up an apartment. But the robot was controlled by a person. Imagine we’re able to develop software to substitute the person – the robot would be doing all these tasks still using hardware that is fourteen years old. One of the trends here is deep machine learning: it‘s the hottest topic at conferences. We also see more and more commercial products using it, especially in the computer vision. And that brings me to systems engineering. Harri Kuusela of VTT mentioned in one of the previous LER stories that sensors and vision systems are now easier to use than before. That‘s true and that can also be said about robots in general. However, the technology stack is becoming more and more complex. For example, to release a robot into the real world, as well as mechanics and electronics we need to engage UI and UX designers or even a legal specialist to make sure the robot conforms to local legislation. Making changes in this complex multi-layered environment is very difficult. The discipline of systems engineering has already helped us build rockets and spaceships - it will also help us build advanced robots.

Whew! Ok, let’s talk a little about the DIH² network. In your experience, what sort of challenges do you think SMEs are facing when it comes to agile production?
When I talk to industry, a number of themes consistently come up. Firstly, there is a false impression about what robotics and digital technologies can do, so the response is along the lines of “It’s not for me”. Secondly, I hear that there are no resources available – be those financial resources, or simply a lack of time. And then there are those that know that they want to do something, but they have absolutely no idea where to start and believe that they have no one who can help them. What I love about the DIH² Network is that we are there to address all these challenges.

One of the key goals of DIH² was to fund Transfer Technology Experiments in agile production. You oversaw SMB in the Netherlands – what can you tell us about it?
The SMB consortium consists of a technology provider called Demcon and a manufacturing SME called Dopple. Dopple produces high-end wireless customized headsets, and they were facing two key challenges with their production. Firstly, they require a very high degree of accuracy in assembling the product - there are 180 individual parts in a 1cm³ earbud and it must be assembled within an accuracy of 10 microns. And secondly there is a huge complexity in scaling up the production – the ear buds cannot be produced in large batches and the customer needs to be relatively close by so producing in Asia doesn’t really work. Demcon has a history of developing solutions for automation in manufacturing and their idea focused on automating the assembly process using a FiWare connectable Smart Machine Base to create a standardised modular automation solution.

Give us some insight into how you brought SMB together.
At RoboHouse one of our main activities is doing exactly this kind of task. We are in constant communication with parties across a broad spectrum that includes technology suppliers and manufacturers. I like to think that we have a virtual radar where we can see where all these organisations are on the path towards automation. With DIH² we knew that Dopple needed automation and we believed strongly that Demcon could help so we contacted them both, explained how the TTE program worked, and it went from there. We always want to see both parties benefit – the proverbial win-win situation - and it really felt like that would happen with this project.

What sort of challenges did SMB have to overcome?
All engineering projects encounter challenges during the execution phase. For SMB, our first challenge was in the “problem space” whereby we had to define needs and requirements and then validate those. Secondly, we had the “solution space” where we needed to understand the constraints imposed by using FiWare, the Orion Context Broker and the Grafana dashboards. And then finally we had to create a Robotics-based Open Standard Enabler for Agile Production (ROSE-AP), but this was all foreseen from the start of the experiment. As I said previously, I am a big proponent of using a systems-engineering approach and our technology provider was highly experienced in this methodology.

What is the future for SMB?
The experiment stage is now finished and the ROSE-AP from it has been published. So, it’s an ideal time to review where we are, look at what lessons have been learned, and then scale the solution up. The next step will be to deploy the product at Dopple in line with the automation roadmap that we produced.

This network brings together a diverse and wide-ranging membership – both geographically and the sectors that the partners operate in. How did you find working in such a large, geographically spread group?
I strongly believe that what we do is not as important as who we do it with. People come first. Projects succeed because of the people involved and that‘s what I love about the DIH² Network - we‘re all in different locations and have different skill sets but we‘re all on the same page, and we all want to make the manufacturing industry better using digital technologies, robotics, and automation.

Do you have a message for other DIHs who are considering joining the DIH² network?
I’m a huge advocate for life-long learning. By joining the network, you get access to state-of-the-art best practices on how to be an effective Digital Innovative Hub. Over the past three and a half years, the current members have built the network, organized dozens of events, conducted 11 technology transfer experiments (with 15 more now underway). We know what works and what doesn‘t. We exchange knowledge and experience constantly and as the restrictions from the pandemic begin to ease, we’re already looking forward to being able to meet each other again in real-life. We’ll all be at the European Robotics Forum in Rotterdam at the end of June, so come along and see for yourselves!