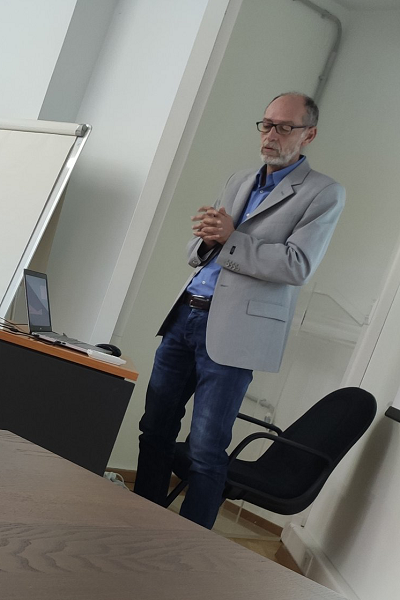 Tell us a bit about your background.
I’m currently a professor in the department of electrical and computer engineering at Democritus University of Thrace in Greece which I combine with a role as a collaborative professor/senior researcher at CERTH. CERTH is the Centre for Research and Technology-Hellas and has a mission to transform scientific knowledge into innovative technological applications. We are currently ranked as the #1 Research Centre in Greece and #14 in the entire EU. Previously, I’ve been an assistant professor and lecturer at the Technical University of Crete’s department of production engineering and management, a research associate/assistant professor at the University of Southern California, and a postdoctoral fellow at the University of Victoria in British Columbia, Canada. At present my work involves various robotics applied-research projects covering virtual reality, intelligent manufacturing, intelligent transport systems and smart homes, and I lead the ConvCAO Research Group at CERTH. ConvCAO is an interdisciplinary group of around 20 researchers focusing on robotics, AI, IoT, and adaptive control, and we’re in the initial phase of establishing a spinoff company that would allow us to commercialize our results. As well as DIH², I’m involved in around a dozen Horizon2020 and Horizon Europe projects and act as coordinator in two of those.

The DIH² Network is about agile production in manufacturing. From your experience, what sort of challenges do you think SMEs are facing when it comes to agile production?
Modern manufacturing is under increasing pressure, and there is a requirement to be able to rapidly modify processes within the manufacturing environment to meet today’s demands. I see three major bottlenecks that hinder agility in SMEs, namely a lack of management skills; technological limitations; and an inexperienced workforce, and to some extent these are all interrelated. To address these problems, there are various ways to make the manufacturing process more agile – for example we can streamline it, update old technology, and improve the speed of management decisions. One of the most important ways we can help is by introducing robotics. Robots – provided that they are embedded with the appropriate level of intelligence – can be one of the most essential ways to introduce agility in a rapidly changing world. Remember that mass production is by nature not particularly flexible and over the last 10 years we’ve seen that as the market has moved in the direction of mass customisation that there is an increasing demand for personalized products, so we absolutely need to become more agile.

What do you think the main barriers are for SMEs when it comes to introducing robots?
It used to be cost, but robots are increasingly becoming more affordable. I think it’s more around the theme of robot intelligence – robotic solutions need to be embedded with the appropriate intelligence that addresses the specific needs of the SME. And then there is the issue of safety and security. The general population still feels insecure around robots – they don’t instinctively trust them.

What can we do to change that perception?
Education certainly has a part to play – we need to let people see that we can elevate a large section of the workforce from a place of low/ no skills into more skilled roles where workers become comfortable working with robots and understanding what they can do. But we also need better interfaces that will improve robotic autonomy. Basically, we’re talking here about robots that can communicate with, and cooperate with the workforce. To do that we need simple, easy-to-use interfaces. From there, we’ll see increased autonomy where robots will be able to assess a situation and take appropriate action as needed.

One of the key goals of DIH² was to fund Transfer Technology Experiments in agile production and you oversaw a project called RoboWeldAR. What can you tell us about it?
RoboWeldAR is – as the name suggests – a project that combines robot welding with AR in an autonomous robotic welding system. It’s a consortium between a technology provider called IKnowHow that provides custom-built automation solutions to industry, and a family-owned ship repair business called Carell that has been in business for 65 years. A lot of this repair work is currently outsourced to Asian shipyards where lower labour costs allow it to be done manually, so the challenge here was to automate part of the welding process using a robot welder together with an easy-to-use AR interface that can be operated by a human. The worker provides high-level commands, and the robot uses its intelligence to take the necessary actions to carry out the welding task. This solution has the potential to deliver significant advancements to the ship repair business, particularly here in Europe.

What did CERTH need to do to put RoboWeldAR together?
At CERTH we organised various meetings to present the aims of DIH² to interested parties and in one of these meetings we brought IKnowHow and Carell together. We already knew IKH, and I liked what they were doing so I was keen to see if we could collaborate with them on this. Part of our role was then to assist them in writing the proposal to ensure that it met the requirements of the DIH² TTE program, but I honestly felt from the beginning that this was going to be a strong candidate for funding and that it would deliver a success story.

What impressed you about RoboWeldAR?
Remember that this program was funding experiments, and with experiments there is never a guarantee of where they are going to end up. You write a proposal and believe that you can achieve certain goals, but once you get underway, all sorts of things can happen. This had many different parts to it and ultimately needed to be integrated into a single solution which we succeeded in doing. Often with robotics projects, you end up with something that has a low level of technical readiness, but what’s impressive with RoboWeldAR is that it’s a mature solution with a high level of readiness.

What’s next for RoboWeldAR?
The next step is for the solution to be deployed across Carell’s facility, but beyond that there is a desire to commercialise the solution and not just in ship-repair but other areas that have similar welding requirements.

Our network has a diverse and wide-ranging membership that is spread across Europe. What have you been able to gain from being part of this?
I’m fundamentally a researcher, so being an LER was something very new for me and was a really interesting experience. The role is a mix between reviewing and evaluating, and also being a consultant to companies that are essentially your clients. In that consultancy role you discover that there are a lot of things that companies out there in the market have little or no knowledge of, and your job is to help them gain that knowledge. And then you see that the results from other projects have the possibility to be used in other real-life applications – that’s powerful.

Let’s finish by looking forward – what’s on the horizon that excites you?
Today we live in an era where both robots and technology are intelligent enough to assess a situation, but moving forward we are going to see that robots will not only assess, but then be intelligent enough to take appropriate action. So, for example in the home, you might have a robot that senses that an elderly person has fallen, and it can then take action to call for assistance. Also, think of mobile phones. 20 years ago, we had analogue phones that made phone calls. Today we have smart phones that provide us with information at our fingertips, as well as giving us the ability to communicate in multiple ways – voice, text, video and so on. I expect that in the next 10 years or so, we’ll see robot phones that will also be able to take action. We already see Apps that can turn your aircon or heating on and off, but there is so much further for this technology to go. That’s exciting.