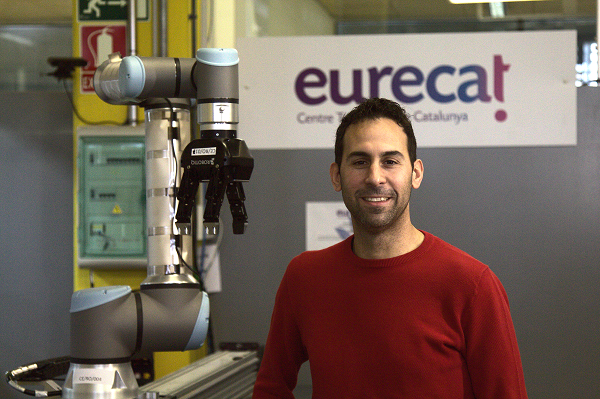 Tell us a bit about your background.
I started out initially as a telecoms engineer and received a Master’s in engineering from the Polytechnic University of Catalonia (UPC), but going back to when I was a teenager, I’d had a huge interest in space exploration, so at postgraduate level I studied aerospace science and technology, again at UPC. After university I began working at an aerospace research and technology centre. We started off as a relatively small team, though we eventually grew to about 20 of us and after being there for a few years, we were absorbed into Eurecat where I’ve been now for seven years. Eurecat is the technology centre of Catalonia, and we see ourselves as the bridge between the world of knowledge and the economic fabric. My current role is that of technology transfer and innovation manager and I sit between the sales team and researchers. Practically, that means I’m involved in bringing new funding to the unit, both public and private. On the one hand we look for European and national level public funding calls that are suitable for us to take part in, but then we’re also selling services to private sector clients. I’m in daily contact with companies around the region to get to understand their needs and help them find funding where they need it. I’m also working with our researchers to see how we can transfer our technology on a commercial basis – sometimes this might involve us licensing the results, or on other occasions, we may create a spin-off company. And then I’m responsible for promoting the results of the unit so I work hand-in-hand with our communications department to do that. Over the years since university, I’ve gradually moved from a pure science and technology focus into something that is more business and innovation orientated.

At the core of DIH² is a belief that we can use robotics to improve agile production in manufacturing. What sort of challenges do you see SMEs facing when it comes to making their production more agile?
The companies I meet and talk to from within our ecosystem have developed their expertise around what they make and sell. They will likely have done this quite successfully for years and in some cases perhaps even decades. Naturally they have built their infrastructure and their fixed asset base portfolio on what has worked for them, but this means that when they need to adapt to new requirements, they are not ready. They lack flexibility – both in terms of their equipment, and what their workforce can do. Machinery is obviously an expensive investment, but if manufacturers had equipment that was reconfigurable, that they could easily adapt – that would enable them to react quickly to fast changing demand, that would position them to enter new markets, or launch new product lines – this would give them a huge advantage. There are technology and non-technology challenges associated with this and for us at Eurecat as an RTO – and this applies on a wider scale to the DIH² Network – this is where we can provide real added-value.

One of the key pillars of DIH² was funding Transfer Technology Experiments in agile production. Your project was AGILPLAS based in Navarra in Spain. Can you give us an overview of what it was about?
I think AGILPLAS was a good representation of these agility needs we were discussing. The SME – Plásticos Xima – is a manufacturing company in the plastic injection business. This is a traditional, long-established industry with big players using big machines. Xima wanted to improve their production system – specifically they had an issue when material would clog the mould in the plastic injection process which then required manual maintenance, which meant that production had to be halted. Bosonit – the technology provider – proposed a solution using FiWare architecture that would provide Xima with better performance indicators. This required a robotic arm to be connected to the injector machine which allowed the team in the factory to better visualise real-time production data. As a result of this, Xima estimated that the overall equipment efficiency (OEE) of the machine improved by 10% with a corresponding improvement of 3% in quality.

What was the matchmaking process to put AGILPLAS together?
This was relatively early in the DIH² project, so we had to explore the best ways of finding suitable candidates. We held in-person robot days as well as on-line webinars where we laid-out the aims of the TTE programme and how the funding process worked. In these events we would have technology providers that were looking for end users and vice-versa and of course this was also good a good opportunity for us to make new contacts. Xima and Bosonit already knew each other so they approached us to better understand how their proposal could fit into the DIH² TTE. My role was then to help them with that and to show them the added-value services they could get access to. I already knew the plastic moulding market – we’d done a pervious project in the sector – but I didn’t know either of them, nor did I know how FiWare could be used. Bosonit however already had experience with FiWare and a clear idea of what ROSE-Aps they could develop, and this was key to the project eventually being funded.

Were there any major complications that AGILPLAS had to overcome?
The biggest challenge was that it wasn’t as easy to obtain the data as they had thought. The solution required them to reengineer part of the machine which took time and effort. Now if they had had some sort of standard interface to access the data, the experiment would have been much more straight-forward, and they could have perhaps replicated this and adapted more machines with the budget that they had.

And did the TTE produce any big surprises for you?
As I said, I knew the sector and what the TTE was proposing wasn’t particularly revolutionary, but the way that they were proposing to use FiWare really intrigued me. You see big name ERPs used in production in this sector, but Bosonit was proposing to build a solution built on FiWare and when I looked at their track record, I could see that they had built a successful business using FiWare to create solutions that work for industry. In the robotics world we’re very used to open source, but I hadn’t seen it used in this way. The great thing is that this has the potential to lower costs for SMEs and I believe that is incredibly valuable.

And what’s next for AGILPLAS?
Bosonit has created a spin-off company called Eliot Cloud and the solution they developed from this TTE is being marketed to potential end-users from there.

How would you like to see the DIH² Network develop?
I think we’ve done a lot of great work so far – and we obviously still have the second round of TTEs to come – but for me we now need to focus on the opportunities for us going forward. As we move beyond being a Horizon 2020 project and become a stand-alone organisation, we need to ensure our long-term sustainability by creating value for our membership. We’ve built a lot of multi-lateral links in the last 3 years and developed a strong community of practices and let’s not forget, that this is despite an unprecedented pandemic that impacted us heavily. But now’s the opportunity for us to grow beyond that and further develop that purpose of accelerating agile production.

What does that look like in practice?
We need to do better at connecting and making the knowledge more widely available to companies. At Eurecat, we’re currently establishing a Pilot Factory Plant which is a place where companies can come and test ideas and solutions – plug a device in, exchange knowledge, connect robotics with IoT, and so on. It would be a ‘test before you invest’ concept to try and accelerate innovation and reduce costs. As is often said – ‘if you’re going to fail, do it quickly and cheaply’. Perhaps this is something we could develop across the broader DIH² network.

What would you still like to see roboticized?
On a personal level, there’s lots of things at home that I’d love to have a robot do, but at a societal level I’d like to see robots do the jobs that I don’t want either my children or my parents to have to do. The dirty jobs. The dangerous jobs. At Eurecat we worked on a project where we used a drone to inspect sewage networks. As part of it, I had to go into the sewers and it’s not pleasant, so if we can get robots to reduce the time that humans have to spend down there, that’s a good thing. I was also recently in a very noisy factory – again not an environment that I think people should have long-term exposure to, so if we can bring down the amount of time that workers are exposed to that noise by using robotic technology, that’s better for everyone. I know this is a big bold statement, but I want robotics to address these types of situations and improve working conditions for the workforce.