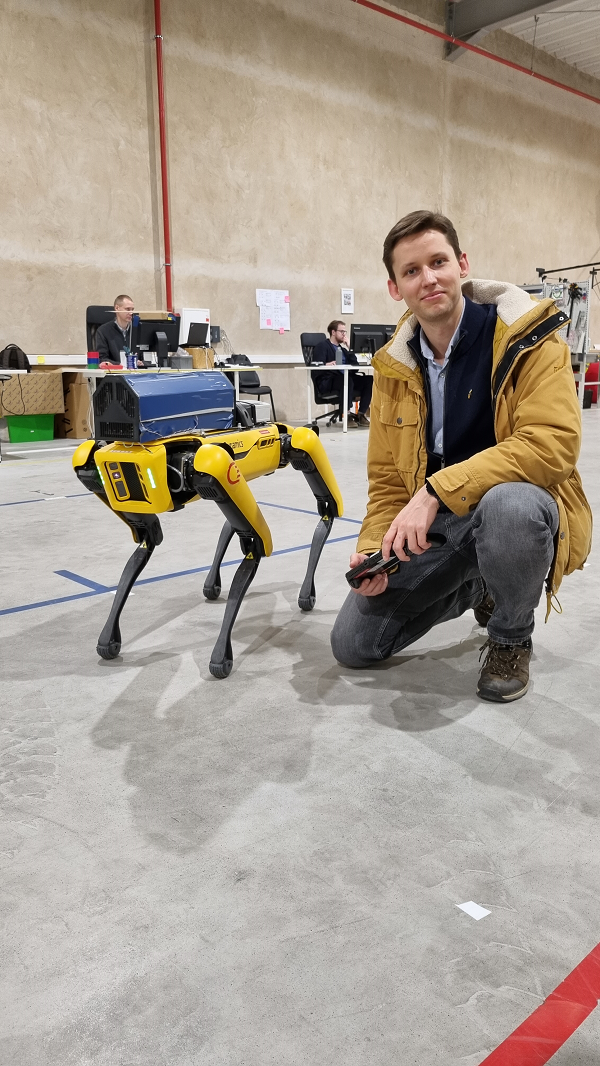 Daumantas, you’re the CEO of the Lithuanian Robotics Association (LRA), but you started out on a different path.
Well, I read politics as an undergraduate at university in the UK before completing a master’s degree in Social and Global Justice. I then started out my career in politics before moving into business development roles, firstly with an investment promotion agency called Invest Lithuania whose goal was to increase competitiveness in the Lithuanian economy and then with a Free Economic Zone in my hometown where we were looking to attract foreign and local investments. In these roles I gained a deep knowledge of the manufacturing sector and from there it seemed a natural shift to become involved with robotics.
I’ve been CEO of LRA for 2 years now and we've built what I like to see as an organic cooperative ecosystem based around robotics. We encourage competition within our membership in a good way that is both fair and friendly. We are still expanding - and we’re really looking to get more members from related areas of robotics, so as well as integrators and developers, we now have members from related areas such as AI, and also end-users.
I personally want industry to see the benefits of robots and understand that robots are about people. A mantra of humans first, robots second.

Picking-up on that last thought, how well do you think robotics is portrayed in the media?
There are lots of misconceptions about robots. The media portrays the fears of the public and to some extent the public’s fears are understandable - there is a belief that robots replace humans. As we start to see robots being more widely used in society - e.g., robots that clean floors, or cut grass then I would hope that this perception will change. When we look at industry, we see that robots are more productive than the manual alternative, but we also see that when we robotize a function such as palletizing, the labour force gets upskilled as part of that process. The people move from being manual workers to becoming robot operators. This is really important to both understand and communicate – skilled people are incredibly scarce, and companies need them. Our experience also tells us that once this happens, the workers see the benefits in terms of wellbeing - both physical and mental - that this new role provides them.

The DIH² network is about agile production in manufacturing. What sort of challenges do you think SMEs are facing when it comes to agile production?
Supply-chain problems are top of the list. I believe that we’re at the start of a new global trend whereby supply chains will be moved closer, and in some cases, companies will introduce more vertically integrated production where they make the component that they need themselves. This is to some extent a reversal of what has been happening over the past 50 years. We offshored a lot of the supply chain by moving production to Asia because labour was cheap, but that created quality issues and now we are seeing significant delivery delays. Plus, that labour is no longer quite so cheap. Customisation is also a major challenge as increasingly companies are working in a project-based environment (this is especially true for SMEs). Each project must be tailored to that specific clients’ needs and as we know, automation becomes harder with customisation and many robots are not easily customisable. Thirdly, there is a shortage of good people, and it seems it’s getting bigger by the day. In Lithuania, we have this situation whereby there are on the one hand huge levels of unemployment but, at the same time, a huge number of open positions. This mismatch is pushing companies naturally towards robots and, in turn, upskilling the workforce. We already see simple functions being conducted by robots in manufacturing and within mass production facilities it’s reasonably easy to robotize. We also see service robots working in warehouses, moving goods from one part of the factory to another. I expect that we will see many more tasks being robotized, e.g., I can see a day when we have robotic waiters in restaurants. Today the price tag of €100k for that robot is beyond the means of a restaurant, but as that technology gets cheaper, that will change.

One of the key goals of DIH² was to fund Transfer Technology Experiments in agile production. You oversaw HWFlexCell which combined an SME in Lithuania with TPs in both Lithuania and Denmark. What can you tell us about the project?
Our SME was a Lithuanian metal processor called LT Technologies who had an old ABB robot that they used for small batch welding. Each time they took on a project, they had to program the robot. It took up to a day each time to do the reprogramming, however they would also often need new fixtures to hold parts in place that needed to be designed and manufactured. As they didn’t do that in-house, they had to subcontract, and each new order would take on average 4 weeks before they could start the project. Then they had to store fixtures in a warehouse which took up space and obviously costs money. The general inflexibility of the robot made them think about how they could transform this into something more useful for them. On the technology side, we had two providers - a Danish company called FlexHex, and a Lithuanian company called Factobotics. Together they offered a solution to engineer a flexible fixture that would adapt to a new product in minutes. Effectively the robot would adapt itself to what was needed for the new production project, saving time and cost and removing a huge bottleneck in the SME.

Give us some insight into how you brought HWFlexCell together.
At LRA we conduct many industry visits as part of our day-to-day job function and we also offer digitization audits whereby we go in, look at the production process, identify bottlenecks and then suggest potential solutions. So, the idea for the TTE was somehow already floating around. We knew the SME and we thought that a local technology provider could help and they in turn found the Danish partner and combined their knowledge. Our role as matchmaker is an ongoing one – we visit as many companies as we can, see as many problems as we can and see what solutions we can propose.

What is the future for HWFlexCell?
They look like they have a pretty bright future. The solution has been spun off into a new company called Flexy Weld which is offering an integrated whole flexible welding cell to the marketplace. They are also building a partnership with a major robot manufacturer Yaskawa Denmark and welding solution manufacturer Kemppi to offer a fully flexible welding robot cell and it's currently being tested by a major global automaker so watch this space!

This network brings together a diverse and wide-ranging membership - both geographically and the sectors that the partners operate in. How did you find working across such a large, far-flung group?
It’s been a great experience working in an international team with all those different backgrounds working towards one goal. The set-up is fantastic - strong technical people and strong businesspeople brought together to assist the experiments in the best possible way.

Why should other DIHs join the DIH² network?
Having a strong network beside and behind you is a key value proposition. My job in LRA would be impossible if we didn’t know anyone and we simply couldn’t create value for our membership. The DIH² Network gives its members a platform at European level and essentially the bigger the network the more value there is for your own organization. A network of strong players across the entire robotics sector will allow us to put agile production at the top of the agenda.

What does the SME factory of the future look like when it comes to agile production?
I’m looking forward to the future development of AI and not just what that will bring to robotics (which will be a lot), but beyond that into wider society. It’s quite simply the most exciting technology that we will witness in our lifetimes. With this however comes a responsibility to ensure that AI is used for good. Humanity will need to be careful and ensure that the necessary checks and balances are in place. But if we get that right, AI will transform everything we know.